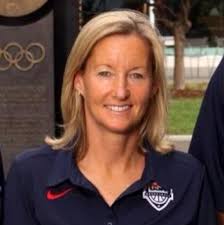 In 1999, Coach Phillips guided the Women’s Varsity Team to its first state title at the Division I level. That same year, the Monarchs finished with a 31-0 record in which Coach Phillips was named National Coach-of-the-Year by Student Sports Magazine. In 2004, American Quarterly Basketball named her as one of five high school coaches in the country that “you should know.”  In 2018, Coach Phillips led the Monarchs to a 29-1 record, earning League and CCS titles, along with a National Championship. Under Coach Phillips’ leadership, the Women’s Varsity basketball team was named national champions by USA Today & espnW for the 2018 season and the team finished the season ranked No. 1 in the country by ESPN, MaxPreps, and USA Today. In recognition of her accomplishments in 2018, Coach Sue Phillips was honored with two national coaching awards, including the prestigious Women’s Basketball Coaches Association’s National High School Coach of Year and the Naismith National High School Coach of Year. Coach Phillips’ program at Archbishop Mitty has produced over 50 NCAA Division One athletes including WNBA standout Danielle Robinson and Olympian Kerri Walsh.

Coach Phillips has also teamed up with Nike.  The Archbishop Mitty High Women’s Basketball program is a Nike sponsored program and maintains a varsity apparel sponsorship with them. This has been extremely effective with helping the younger generation because brands such as Nike are common and is something that the youth can easily relate to.

Coach Phillips graduated from Archbishop Mitty High in 1986 with several scholarship offers. Choosing to play softball at Northwestern University over basketball at Cal,Sue became an All-Big Ten and All-Region player for the Wildcats before returning to Mitty as a math teacher and coach. Whether you’re in need of a coach, mentor, consultant or merely a friend that can offer insight on succeeding in the arena; Coach Sue Phillips is the primary candidate. She presently resides in San Jose,CA and looks forward to speaking with you soon!